I took pictures in Dartmoor on our third visit, the first time we had a little sunshine walking there. However, as luck would have it, I had issues rewinding the film, and opening the camera in not ideal conditions resulted in light damage. Was it still worth printing the images?

Much can get in the way of getting a nice print: dust, light-glitches, drying marks on the film. Issues that can be alleviated with patience, care, and a proper setup. However if the negative itself is damaged, the challenge take a different proportion, for darkroom options are limited. As an example, here’s one of my Dartmoor pictures. I love the way those ancient trees rise to dominate the windswept grass. But certainly, those dark shapes in the sky aren’t clouds. 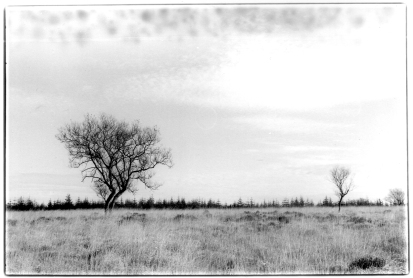 Of course, nowadays, anything can be done with a photographic software, so there is a digital way to ‘rescue’ the image. However, when Jess and I began to work on the black & white booklet documenting her work using the photographs I had taken, we made the deliberate choice to remain as hands-on as possible, in keeping with Jess’s artistic statement. This meant as little computer interference as possible, hence scanning prints obtained in the darkroom from film photographs. This kept the process simple and with a clear boundary: as far as individual pictures were concerned, the art stopped at the darkroom print. I have kept this ethos ever since, so digitally tweaking the image was out of the question.

Darkroom alternatives were to crop the glitches out of the picture, or dodge the corresponding area. One of the advantages of deciding to be an independent artist is the freedom in setting the boundaries of one’s work. In the case of photography, the key moment to me is that of pressing the button and the image is composed then, so no later cropping allowed (I am not so strict with colour pictures taken on a small digital camera or on my phone for portability, but for black & white photography, I use a reflex camera, so there is no excuse to not get it right at the moment of exposure). I tried dodging, but the result was highly unsatisfactory and left close to a third of the picture blank. More care, more time in the darkroom might help, but even though I enjoy printing, most important for me is to spend time outside, looking – ultimately, this is what I believe will result in better pictures.
So it looks like a return to Dartmoor beckons.

In some situations though, I might just accept the light glitch as part of the process, a testimony that I am working with light and chemistry rather than with a mouse facing a screen. For example, below is a print that works for me.

The light was perfect then, giving a Japanese quality to the leaves and branches of the foreground sycamore, who seems to be looking after the other trees like a benevolent relative. So no, the result is not technically perfect, but it fits my artistic ethos and makes a statement I am happy to stand by.

Technical errors can also lead to interesting effects and discoveries. I do like this print, in all its elusiveness.

It was obtained by inadvertently exposing the wrong side of the paper and might end up showcasing  it for it uncannily captures the essence of what I was after: how those ancient, isolated trees rise out of the grassland.