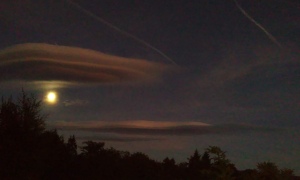 At the end of July, I was invited to tell stories at the closing party of the first Moon Festival organised in London. The evening was run by the Young Producers at the Greenwich Maritime Museum, where a special Moon exhibition celebrates the 50 year anniversary of the 1969 Moon landing. What had interested the Young Producers was my track record of mixing folk tales with science as I have done for a number of years at the York Festival of Ideas. They asked whether I could mention conspiration theories. Being unfamiliar with those, I ended up including a touch of Sci-Fi in the more reflective part of my performance. Below I develop further what I tried to convey.

In a Chinese story, retold by E.C. Krupp in Beyond the Blue Horizon, Heng O chances upon the immortality pill that her husband, the famous archer Shen I, has hidden in the rafters of their house as he waits for the appropriate time to take it. To Heng O, it looks like a beautiful sweet. She eats it and begins to float. At that moment, her husband returns home. Understanding what she has done, he pursues her with great anger. So she floats off, escaping all the way to the Moon.

So there is a Chinese lady on the Moon. The Americans in charge of the space programme however chose to send men into space: white men, all from the military except for a scientist, the geologist Harrison Schmitt who was part of the last crew to land on the lunar surface. A group of women, the First Ladies Astronaut Trainees, had trained as part of a private programme, yet despite their skills, they were never seriously considered for a space mission. One of them was Jerry Cobbs, a record breaking aviator. A black pilot, Ed Wight successfully went through the arduous test pilot training with the added challenge of segregation, yet was sidelined when the final choices were made. First Nation’s people? They’re not even mentioned. The first Native American astronaut, John Herrington, went on a mission to the ISS in 2002.

I hope that you’ve enjoyed watching Hidden Figures and appreciated that finally women, and black women in particular, are getting more of the recognition they deserve. Yet if you read the much more detailed book, you understand that the women broke through in larger numbers because their brain power had been required for the 1940s war effort.

This to me is the dark side of the Moon landing, the uneasy, ongoing relationship with the military. Despite the plaque that Neil Armstrong and Buzz Aldrin had with them stating that they “came in peace for all mankind”, they remained white military men planting an American flag ahead of the Russians – the result of the Cold War, of competition and conquest, of a wish for supremacy.

It is crucial to acknowledge that the prototype for the Saturn rockets were the Nazis’ V-2 rockets, which by the end of the war were built by Jewish prisoners from a concentration camp in squalid underground conditions, and which killed tens of thousands in bombings in Europe.

Perhaps also there was a need for a distraction from Vietnam for ahead of the speech that launched the Moon Programme, President Kennedy had approved sending ‘advisors’ to the South Vietnamese government as well as the use of Agent Orange.

Then what about spin-off technologies? Teflon is often mentioned to me as a great example, yet I can assure you that you can to cook perfect pancakes without a non-stick pan and that might even be better for your health. In fact, it seems that most technological ‘progress’ benefited the militaro-industrial complex, furthering in particular the development of inter-continental ballistic missiles able to carry nuclear warheads.

That uneasy partnership is far from over. The Moon exhibition’s last room highlights the regain of interest for lunar travel by governments, corporations, and even individuals. The reasons: potential mineral resources; a springboard or testing ground for future missions to Mars or further; and even though this is not acknowledged, the Moon remains a strategic location in the solar system. The curators, as well as the Young Producers, are asking: Should we return to the Moon? Who does the Moon belong to? Can we buy the Moon? Even though an Outer Space Treaty signed in particular by both the US and the then Soviet Union recognised the Moon (and any other space object) as a ‘global commons’ accessible to peaceful missions of any nationality, the question of resource exploitation and mineral land rights is not yet legally settled. NASA is aiming to return to the Moon by 2024; Lockheed-Martin, the world’s largest military corporation, is the lead contractor for their manned spacecraft Orion.

We still have a long way to go before exploration is decoupled from conquest or exploitation – in facts and, I should add, in most fictions: can we not even imagine an alternative?

Back in the 1960, what did the astronauts find on the Moon?

They didn’t mention Heng O, nor the Palace of Boundless Cold built by her reconciled husband and that she now inhabits, nor the cassia tree that grows nearby, nor the white rabbit who tends it.

Back in the 1960, what did the astronauts find on the Moon?

Dust and rocks. Dust so thin it infiltrates everything; rocks billions of years old, older than any rock on our volcanically active planet.

In a short story published in 1951, Sentinel of Eternity, Arthur C. Clarke describes a research mission on the lunar surface. A geologist, his assistant and their driver truck across the landscape looking for minerals and collecting samples. One morning, as he’s frying the breakfast bacon, the geologist happens to look out of the galley window and notices a strange light shining from an unnaturally flat peak top, as if it were reflected of a mirror-like surface. He convinces his companions for the need to investigate – if anything, it’d be a break from the routine and an opportunity for a hike. So the geologist and his assistant scale the mountain, helped in their efforts by the Moon’s low gravity, as well as their fully regulated space suits. At the top, they find a black smooth tetrahedron surrounded by a hemispherical force-field, obviously an alien object from a much more technologically advanced civilisation. Twenty years later, as the structure still defies any scientific analysis, the men stationed on the Moon blow it up with nuclear power. They can only destroy what they don’t understand. Of course the geologist remains haunted by his discovery and believes the object to be a beacon, a sentinel left by another civilisation in order to be warned of the time when the intelligent species likely to emerge on the promising blue planet of this solar system begins to develop space travel technology.

Perhaps there is no sentinel on the Moon.

Perhaps there is one, still waiting to be found.

Perhaps there is one, it was noticed by the astronauts or by unmanned missions, and no-one told us about it.

If there is one (and even if there isn’t), we might want to ask: what kind of truths are we showing about ourselves? About (hu)mankind?

That of a culture with the technology to go to the Moon and back, yet who treats its home planet as supply house and sewer, and is ready to let it die?

That of a culture with the technology to send tourists to space, yet ready to let millions die in and of poverty?

Tell me, what is there to be proud of?

Of course I’d still love to go to the Moon, but not like this.

The Americans went there in a spirit of conquest, on a collective, if not on an individual basis. Yet back on Earth on July 21st 1969, people from all backgrounds and all countries have been hooked to the broadcast of Armstrong’s first step on the lunar soil. One can’t help it – despite the misgivings, there is a sense sacredness to this moment that can still be felt 50 years later.

What the astronauts rediscovered was the Earth, the Earth rising over the lunar horizon. Our own, stunningly beautiful spacecraft. They have been awed by what they have witnessed, some have experienced what has been called the ‘overview effect‘. Despite the glory, the astronauts didn’t return as conquerors.

The plot of a recent French thriller involves a return to the Moon and the idea that it is possible to develop a planetary consciousness by making the overview effect accessible to the majority of people. The author, Jean-Pierre Goux, followed through by founding the Blueturn project, which offers access to videos of the Earth as it rotates thanks to a very clever processing of the daily images taken by the NASA/DSCOVR satellite. His aim is to offer anyone a space traveller’s view of our home planet.

Should we return to the Moon?

My own answer is no, not yet, not until we find better ways of relating to each other, not unless we use less destructive, less polluting technologies, not unless we are able to send a genuine civilian mission of discovery.

In the meantime, we can learn to relate to the Moon from the Earth. We can look at the Moon, acknowledge her, follow her movement in the night sky, find ways to honour her cycles and reconnect with them. Perhaps we should ask: what does it mean to know the Moon?

Tonight, August 6th, on the anniversary of the Hiroshima bombing, the Moon is a waxing crescent visible towards the West at sunset.

I take this opportunity to thank the Young Producers, the National Maritime Museum, the Moon Festival team; the audience who joined us; and my fellow performers of the ‘chill out space’ who were themselves a treat to watch.